A 43 year old male with a history of HIV presented to the Emergency Department with complaints of headaches, blurred vision and ringing in his ears. An ophthalmology consult was placed and the patient was seen in the emergency room. He reports seeing a blind spot in the temporal portion of his vision in the right eye, while the left eye was very blurry.

On exam his vision was 20/40 OD and confrontational visual fields (CF) at 3 ft OS. His intraocular pressure (IOP) was 9 OU. EOM were full as was his visual field to confrontation. His pupils were equal and reacted to light 4->2 mm. There was a trace APD OS.

Given the patient’s history of HIV, he was tested for syphilis. His syphilis IgG was positive, as was his RPR. This prompted a lumbar puncture which confirmed neurosyphilis via CSF VRDL. He was started on IV penicillin G for 14 days.

He followed up 2 weeks later in the eye center. At this time,  his vision had improved to 20/30 OD and 20/40 OS, although he reported a temporal scotoma OS. His IOP was normal, and his anterior segment exam was only significant for mild persistent keratic precipitates. Exam of his posterior segment demonstrated resolution of disc edema, but significant peripapillary atrophy. 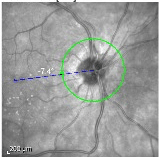 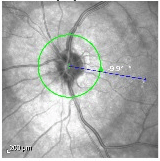 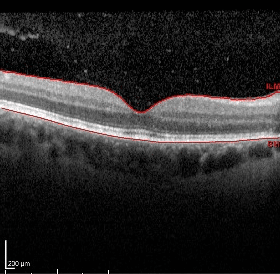 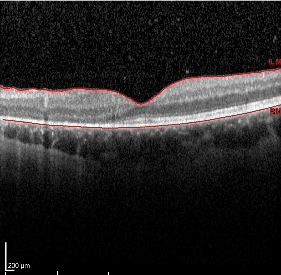 As the patient was given the appropriate treatment for neurosyphilis and had no active inflammation at this visit, the decision was made monitor him without further treatment.

Syphilis is known as one of the great masqueraders because of its multiple presentations. For this reason, it should always be ruled out in a patient with uveitis. Syphilis can remain latent in a patient for many years before they develop symptoms. Syphilis can cause anterior uveitis with either granulomatous or non-granulomatous inflammation. Vitritis, papillitis, vasculitis, vein occlusion, retinal necrosis, neuroretinitis and exudative retinal detachment are all possible manifestations of neurosyphilis in the posterior segment. Eye involvement in syphilis is generally considered neurosyphilis and patients need to be treated accordingly.

One of the more classic presentations of syphilis is acute syphilitic posterior placoid chorioretinitis. This is illustrated by the development of flat yellow or gray placoid lesions with atrophic centers in the macula or peripapillary region. These lesions typically demonstrate a “leopard spot” hypofluorescence on fluorescein angiogram. Given the outer retinal and RPE atrophy that occurred in our patient, he likely had peripapillary placoid lesions. While treatment can sometimes limit the severity of placoid disease, once atrophy sets in, the changes are typically irreversible.

Diagnosis of ocular syphilis has changed over the years, and can be confusing due to the many different tests available. The CDC now recommends screening patients suspected of having syphilis with enzyme immunoassay (EIA) or chemiluminescence assay (CIA) tests to detect IgM or IgG (for early and late infections respectively). These tests are highly sensitive but have lower specificity. Therefore, if they are positive, they should be confirmed with non-treponemal testing (RPR, VRDL) and treponemal testing (FTA-ABS, TP-PA+). CSF analysis with FTA-ABS and VRDL should also be considered to confirm neurosyphilis in all cases with eye involvement. All cases of syphilis must be reported to the state Department of Health. The treatment for syphilis in all stages is Penicillin G, with the dose and route varying by stage of infection. In neurosyphilis, the patient is treated with IV penicillin G for 10-14 days. After treatment of the infection is initiated and a response is noted, residual inflammation in the eye may be managed with adjuvant steroids.