A 64 year old woman presents to clinic with a 2 month history of shadow in her vision. She states that over the last 6 months, she has noticed her vision worsening.  However two months ago she noticed a shadow in her vision and found that her central vision was diminished. She also reports floaters in both eyes but denies flashing lights. She has no other known ocular history.

Her past medical history is significant for hypothyroidism and hypertension

She has no past surgical history

ROS:
10 point review of systems is negative except for blurred vision.

On exam, her vision is 20/150 OD and 20/40 OS. IOP is 17 and 22 respectively. Her confrontational visual field was constricted in the right eye and full in the left. Her lids were normal. In the right eye, there were two prominent dilated episcleral vessels superiorly. The left eye was white and quiet. There was no anterior chamber inflammation, and both eyes had 2+ nuclear sclerotic cataracts.
Her posterior segment exam of the right eye is shown below: 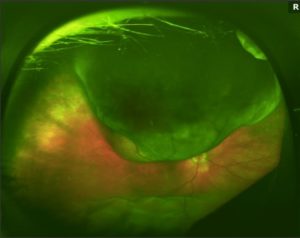 Pseudocolor widefield fundus photo of the right eye demonstrating a large choroidal mass with overlying retinal detachment, as well as a near total retinal detatchment with macular involvement. Inferiorly there is shifting subretinal fluid.

No retinal breaks were identified on scleral depressed exam.

The left eye was normal except for inferior cobblestone degeneration.

A B-scan ultrasound was performed: 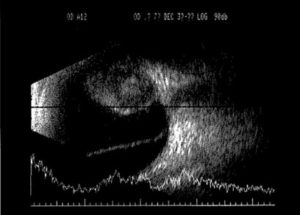 A B-scan ultrasound of the right eye with A scan waveform underneath, demonstrating a large choroidal mass with low internal reflectivity. The lesion measures 17mm x 18 mm and is 11mm thick. There is also an inferior retinal detachment.

Posterior Uveal melanomas (including choroidal and ciliary body melanomas) are the most common primary intraocular malignancies in adults. Despite this, they are relatively rare with an incidence of roughly 5-6 cases per million people per year. The median age of onset is 55 years old and risk seems to decline after 70 years of age. They occur most commonly in white patients, and do not usually run in families.  Other risk factors for melanoma include choroidal nevi, ocular or oculodermal melanocytosis, and possibly cutaneous nevi. The risk in ocular or oculodermal melanocytosis is quite high, with a lifetime risk of approximately 1 in 400. Although choroidal nevi may become melanomas, it is still very rare, with approximately 1 in 5000 nevi developing into melanomas per year.

A pneumonic for estimating the risk of nevi developing into choroidal melanomas was coined by Drs. Carol and Jerry Sheilds and associates, “To Find Small Ocular Melanomas”. The first letter of each word represents; T, thickness >2mm ; F, fluid (subreinal); S, symptoms; O, orange pigment; M, margin within 3mm of optic disc. Choroidal lesions with 0 of these factors, have a low risk (3%) of growth at 5 years, wheras risk increases with 1 (38%) or 2 (50 %) of these risk factors. Since the development of this pneumonic, other features have been added to increase detection including; Ultrasound hollow, absence of halo, absence of drusen, and diameter >5mm.

Large choroidal melanomas have a very high risk of metastasis, especially to the liver. Thus it is important to identify melanomas when they are small and the risk of metastasis is low.  The collaborative ocular melanoma study, COMS, demonstrated good survival in small melanomas with observation alone and similar survival in medium melanomas treated with radiotherapy plaques or enucleation. Large melanomas were treated with enucleation, and the use of perioperative external beam radiation was not shown to improve survival.

Our patient is at very high risk of metastasis given her very large melanoma (11mm thickness). She was sent to an oncologist to have a systemic workup for metastasis, and is scheduled for enucleation.