A 42 year old female presents with one week of blurred vision in the left eye. She states that a week ago she had a “spider bite” and subsequently developed flu-like symptoms. As a result, the patient was started on doxycycline but noticed the vision change the day after the symptoms started. She has no significant past medical history and was not on any medications except the doxycycline.

Her vision in the right eye was 20/20-1 and in the left eye she was 20/30. IOP was 12 in both eyes. There was no APD and CVF were full, however she had a central scotoma on Amsler grid testing. Her anterior segment exam was normal.

Evaluation of her posterior segment demonstrated clear vitreous OU. Below are her fundus photos: 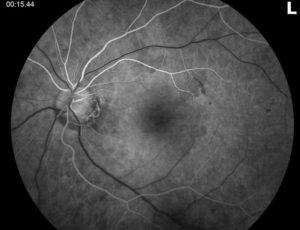 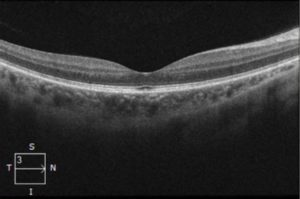 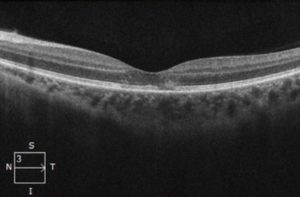 Above: OCT of the macula. The foveal contour is normal and there is no abnormality in the retinal layers or RPE.

Below: OCT of the left macula. There is hyperreflectivity in the perifoveal outer nuclear layer with disruption of the underlying ellipsoid zone. 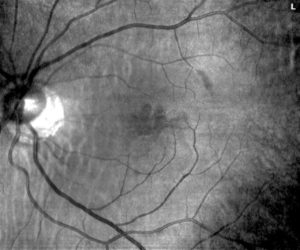 AMN was first described in 1975. At the time Bos and Deutman described it, OCT was not available.  As a result, the diagnosis was made clinically based on finding reddish brown, often wedge shaped or oval lesions appearing centripitally from the fovea, or sometimes in a concentric pattern. AMN commonly affects young women in their 20s or 30s, and there is an association with preceding flu-like illness in half of cases. In addition, the use of oral contraceptives, epinephrine or ephedra are also associated.

Fluorescein angiography and ICG angiography are not typically useful in diagnosing this condition, as they are normal in the majority of cases. Our case does show a branch retinal vein occlusion also which is typically not associated with AMN.  With the increased use of OCT, the characteristic OCT findings became evident, increasing the frequency of diagnosis of this condition. Acutely, there is hyperreflectivity in the outer plexiform layer, which resolves as hyperreflectivity in the outer nuclear layer and disruption of the ellipsoid zone develop, usually within days. Although these lesions tend to improve, there are often lasting changes. Vision may remain affected, or sometimes improve to baseline.  The underlying pathology (demonstrated on OCT-Angiography) is acute ischemia at the level of the deep capillary plexus, which is why the lesions have such a characteristic wedge shape.