On examination, her vision was 20/20 and IOP was 16 bilaterally. Her pupils were normal and no APD was detected. Her visual field was essentially full to counting fingers, although she had slight difficulty in the inferonasal quadrant of the right eye. Her anterior segment exam was significant for blepharitis OU and 1+ nuclear sclerosis in both eyes. Her posterior segment exam in the right eye demonstrated a PVD and a normal optic nerve. There was retinal whitening in the superior macula, with a sclerosed superotemporal arteriole.  The left eye finding also demonstrated a normal nerve and a superior sclerotic arteriole with no retinal whitening. On fluorescein angiography of the right eye, there was absent filling of the superotemporal arteriole and capillary nonperfusion in the superotemporal quadrant. The left eye demonstrated absent filling of a superior arteriole with nonperfusion and a focal area of neovascularization. 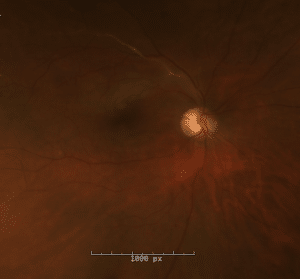 Fundus photo of the right eye demonstrating retinal whitening in the superior retina with sclerosis of the superotemporal arteriole. 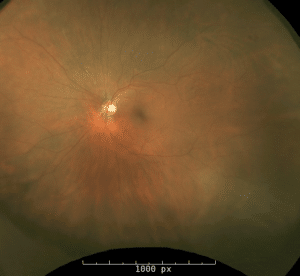 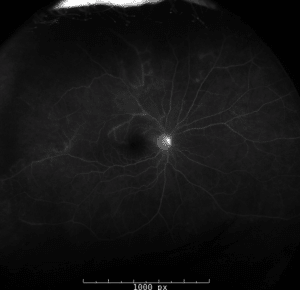 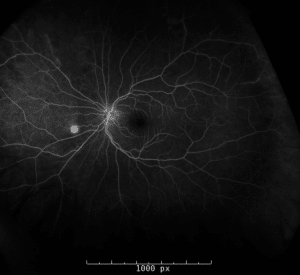 Fluorescein angiograph of the left eye demonstrating incomplete vascular filling of the superior arteriole with capillary nonperfusion in the superior retina. There is also neovascularization elsewhere in the nasal retina.

OCT of the right eye demonstrating inner retinal hyperreflectance of the superior macula.

Based on the branch retinal artery occlusions in both eyes, she was sent to the ER for urgent workup. Her workup at that time included ESR, CRP, CTA of the head and neck, echocardiogram, and MRI. All these were found to be normal and she was discharged.

Upon follow up in the eye clinic one month later, she was found to have a new branch retinal artery occlusion in the right eye. At this point she was admitted to the hospital for a more thorough workup, including hypercoaguable states and cardiac abnormalities. She was found to have paroxysmal atrial fibrillation. A trans-esophageal echocardiogram was performed, and there was a left atrial clot seen. She also tested positive for antiphospholipid antibody and MTHFR Gene homozygous, which are both hypercoaguable states. She was started on apixaban and has not had further events.

It is important to remember that while embolic disease is most common, other serious conditions, such as vasculitis, hypercoaguable states, and giant cell arteritis can present with artery occlusions. While giant cell arteritis is much more likely to cause central retinal artery occlusions, susac syndrome is a vasculitis of the central nervous system that presents with encephalitis, tinnitus/hearing loss, and multiple BRAOs.  These conditions can cause significant morbidity and even mortality and prompt diagnosis and treatment is necessary.

There is no proven treatment for retinal artery occlusions. Most attempts at treatment are made in CRAOs, where profound vision loss is likely. Attempts to decrease the pressure suddenly with anterior chamber paracentesis, or ocular massage have failed to demonstrate consistent vision benefits. However, if the patient presents within 90 minutes (some sources say up to 4 hours) of acute vision loss, conservative treatments such as IOP lowering medications or ocular massage may be attempted with little downside. Given their more subtle presentations, BRAOs are less likely to present acutely, and the above treatments are unlikely to benefit the patient.

Our patient had multiple mechanisms that likely contributed to her multiple artery occlusions. Luckily both her atrial fibrillation and hypercoaguable state are currently well-controlled anticoagulation.