A 52 year-old man was referred to Illinois Retina for suspected central serous chorioretinopathy. He has had increasing central visual distortion in his left eye for one month. Denies other symptoms, including flashes, floaters, or peripheral vision changes. Denies steroid medication use.

Best-corrected visual acuity is 20/20 in the right eye and 20/30 in the left eye. IOP is within normal limits in both eyes. Anterior segment slit lamp examination is unremarkable in both eyes. 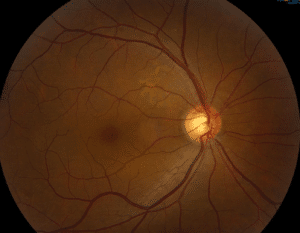 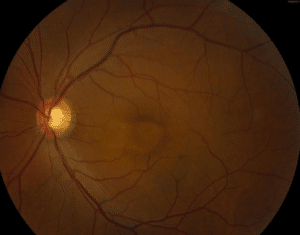 Optical Coherence Tomography demonstrates RPE changes in the superonasal right macula, consistent with what is noted on exam, without fluid or edema. OCT of the left macula reveals nasal RPE changes with an adjacent focus of choroidal excavation and overlying subretinal fluid, which extends subfoveally. 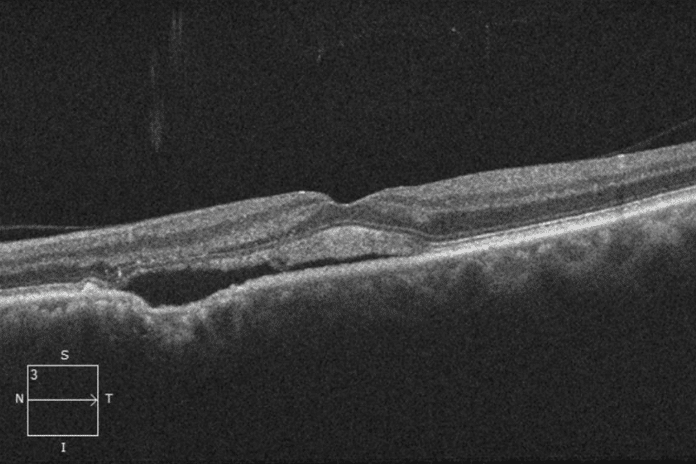 Fluorescein angiogram obtained shows anticipated transmission defects corresponding to RPE changes in the right eye noted on exam without other microvascular abnormality such as leakage. FA of the left eye demonstrates a small, indiscrete area of hypofluorescence which is noted in early frames, but becomes increasingly apparent in later frames, suggestive of leakage from minimally classic or occult CNV. 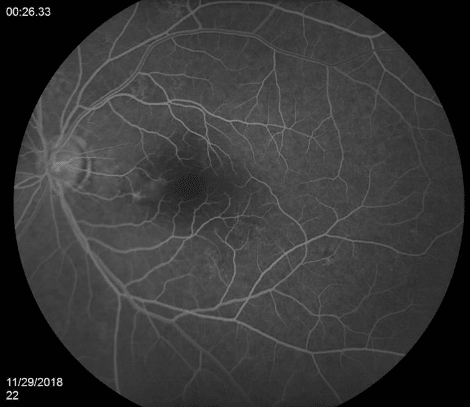 Focal Choroidal Excavation (FCE) was first described as an unusual finding on OCT by Jampol and associates in 2006,1 characterized as a localized excavation in the choroid with normal appearing overlying retina.2 It has been noted to exist concurrently with central serous or in patients with a history of CSC at a high prevalence.1 One of the most commonly reported complications associated with FCE is choroidal neovascularization. The exact cause of this is a subject of speculation, but various theories have been proposed including abnormal structure or configuration of the overlying RPE or Bruch’s membrane which may predispose to CNV.1,2

In this case, the FA was strongly suggestive of CNV rather than CSC and there otherwise was no sign of macular degeneration in either eye. In addition to the fluid being directly adjacent to excavation on OCT, the location of the neovascular membrane on FA coincided perfectly with the FCE so it was suspected that the CNV was secondary to the FCE. However, previous CSC was also suspected in this patient because of the bilateral RPE changes noted on exam, and therefore it cannot be said with absolute certainty that the CNV is not secondary to CSC.

Lesions in focal choroidal excavation often remain stable and show little or no change over time.2 No treatment is indicated for FCE by itself, but therapy is needed for secondary CNV, if it develops. Treatment usually includes anti-VEGF injections targeted at the neovascular membrane.