A 50-year-old Caucasian female presented to clinic new onset floaters in her left eye after a recent car accident, although she did not suffer any facial or ocular trauma. She had no eye pain, no redness, no flashes, no curtain, and no veil. Her medical history was unremarkable and family history was significant for poor vision (sister), AMD (mother) and retinal detachments (mother). Review of systems was negative for chest pain, dyspnea, nausea, vomiting, diarrhea, constipation, rashes, or any other systemic symptoms. She denied smoking, alcohol use, or any illicit drug use. .

Vision was 20/20 in both eyes and IOP was 16 and 18 in her right and left eye, respectively. Confrontation visual fields were full bilaterally. Anterior exam was unremarkable. Evaluation of her posterior segment demonstrated a posterior vitreous detachment in her left eye. Below are her fundus photos:

Fundus Photos: Both eyes show pink, healthy appearing nerves with small C:D ratios. The right eye demonstrated chorioretinal scars superiorly and inferotemporal. Her left eye showed two superior tears (unable to see on image), but also an inferotemporal hemorrhage and an area of sclerotic vasculature inferotemporal.  Based on her abnormal findings on fundus exam, her retinal tears were treated with laser the same day and she was brought back for further imaging. Fundus autofluorescence and fluorescein angiography of the left eye are below. 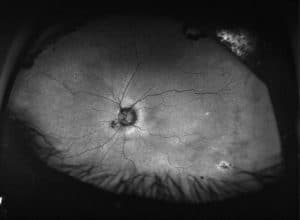 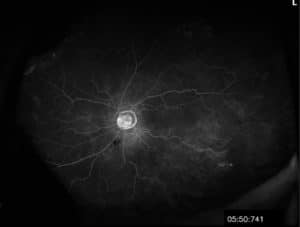 Incontinentia Pigmenti (IP) is an X-linked dominant syndrome that usually develops at birth or in early childhood. It is also known as Bloch-Sulzberger syndrome. Its incidence is 1 in 40,000 and as it is X-linked dominant, the vast majority of cases are seen in women as male fetuses rarely survive. There is often a family history of the disease with a history of miscarriages as well.

The most common findings are skin lesions. Initially, babies or infants will show vesicular lesions with bullae and pustules. These then progress to verrucous lesions with papules and keratotic patches. There is then a hyperpigmented stage between infancy and adolescence followed by a hypopigmented stage that can present in early adulthood. The early lesions can be very severe, often needing significant treatment to avoid infection or scarring. Patients can also suffer from neurological symptoms such as seizures, motor inhibition, intellectual disability, and even cortical blindness. Dental abnormalities have also been noted in many cases.

Regarding ophthalmic disease, the majority of findings stem from the vasocclusive nature of the syndrome. Eye findings are seen in around 40% of patients with IP. Retinal findings are common and include neovascularization, hemorrhage, avascularity, and retinal detachments. There can also be optic nerve atrophy. Non-retinal findings include cataracts, strabismus, nystagmus, and uveitis.  When found in an infant, avascular retina should be treated similar to retinopathy of prematurity with laser photocoagulation. Intravitreal anti-VEGF has been studied but is not currently considered standard of care.

Our patient has done well since diagnosis. Of note, she did have skin issues as a child and her mother had suffered the loss of five male fetuses. As there is no current standard of care for these findings in an adult, we have discussed future laser photocoagulation versus anti-VEGF management and will continue to monitor.