A 62-year-old Hispanic female presented to clinic with a complaint of blurred vision for two months. She also noted intermittent flashes in both eyes, but no floaters.  She had no eye pain, no redness, no floaters, no curtain, no veil, and no recent trauma.  Her medical history was significant for type 2 diabetes mellitus, hypercholesterolemia, hypertension, and thyroid disease with a thyroidectomy over ten years prior to exam.  Review of systems was positive for recent blood in her urine and progressive hearing difficulty for 1 year, but was otherwise negative.  She denied smoking, alcohol use, or any illicit drug use.

Vision was 20/40 in her right eye and 20/30 in her left eye.  IOP was 18 and 16 in the right and left eyes, respectively.  Confrontation visual fields were full bilaterally. Anterior exam was unremarkable.

Evaluation of her posterior segment demonstrated clear vitreous bilaterally.  Below are her fundus photos: 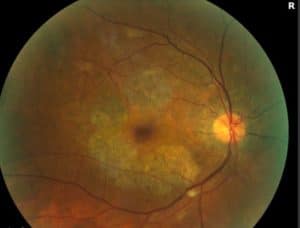 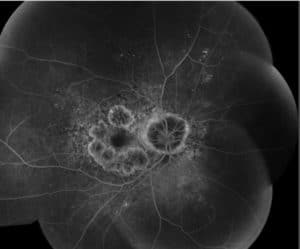 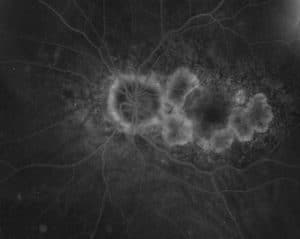 Florescein Angiogram OU: Both eyes with transmission defects around the fovea representing RPE atrophy as well as focal hyperfluorescence consistent with microaneurysms. 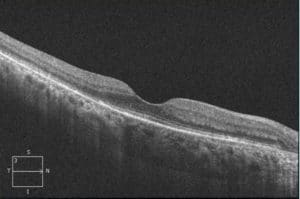 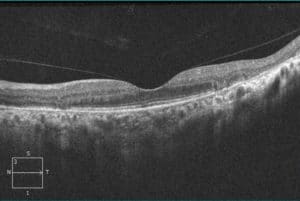 Maternally inherited diabetes and deafness (MIDD) is a subtype of diabetes mellitus caused by a change in mitochondrial DNA passed down from a mother to all of her children.  It is most commonly due to an adenine-to-guanine transition of mitochondrial DNA.  Although the symptoms often vary between patients, the most commonly seen symptoms include diabetes, sensorineural hearing loss, macular dystrophy, and intestinal malabsorption.  The diabetes and hearing loss usually develop when patients are in their second to fourth decade and often, hearing loss occurs before diabetes.

As in our patient, macular pattern dystrophy is often seen in this disease.  A large multicenter study found that 86% of MIDD patients had bilateral macular pattern dystrophy, demonstrating RPE hyperpigmentation surrounding the macula.  Advanced cases sometimes show areas of RPE atrophy surrounding the macula and may involve the fovea.  It is important to offer genetic testing to confirm the diagnosis as well as counseling as any children of an affected mother will inherit the genetic mutation, although the symptoms they develop can vary greatly.  In addition, cardiac defects can be seen in this mutation, thus referral for systemic evaluation is very important.

Our patient opted for genetic testing which confirmed the diagnosis of MIDD.  She was counseled on the need for her children to be monitored and she has also undergone further systemic testing revealing no cardiac issues.  Despite the striking appearance of her fovea, she has maintained good vision with her vision 20/40 and 20/60 in the right and left eyes, respectively.  She will continue to be monitored regularly for further advancement of the disease.