A 34 year old man presents with blurry vision in a new “blind spot” in his left eye vision that has been present for ten days. He noticed it has slowly gotten worse. He denies flashes or floaters. His review of systems is otherwise negative except for a recent viral illness four weeks ago that lasted two weeks.

Past medical history: He was recently diagnosed with hypertension and started on Losartan.

Family and social history are unremarkable.

Anterior segment slit lamp examination is normal bilaterally. The posterior segment of the right eye was normal except for pigment mottling in the macula. The left eye had 1+ vitreous cells and multiple small white spots temporal to the fovea with mild foveal granularity.

OD: The right eye is normal with no subretinal fluid or drusen. 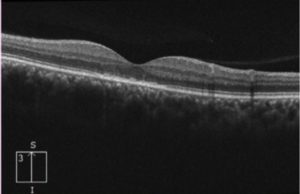 Fluorescein angiogram of the left eye demonstrating hyperfluorescence in the area of the white spots. Some of these spots take on a wreath-like configuration around the nerve. 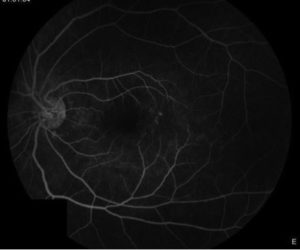 Fundus Autofluorescence of the left eye demonstrating hyperautofluorescense in the area of the white spots clinically. 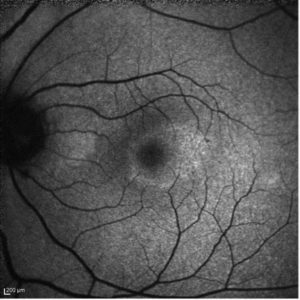 Multiple evanescent white dot syndrome is a condition that generally affects younger myopic patients, predominantly women. It is typically unilateral and associated with a viral prodrome. Patients usually report new onset scotoma, sometimes with photopsias. On exam it is characterized by numerous small white dots in the posterior pole. There is often foveal granularity and disc edema as well. Vitreous cells can also be present. OCT often shows disruption of the outer retina, especially the ellipsoid layer. The fluorescein angiogram typically shows “wreath” like patterns in the areas of the white dots. There is often hypocyanescence in these areas on Indocyanine green angiography. Typically the prognosis is favorable with patients improving in 3-10 weeks without treatment.