A 38-year-old man presents with complaints of blurry vision, mostly at near, in the left eye for several weeks. No known ocular problems, but did have a similar episode several years ago which resolved without intervention.

POH: No past ocular problems

PMH: No prior medical problems

PSH: No significant past surgical history

Social Hx: No tobacco or alcohol use

The anterior segment exam is unremarkable in both eyes with no anterior chamber cell or flare noted.

The fundus appearance is as portrayed here: 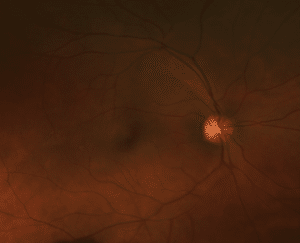 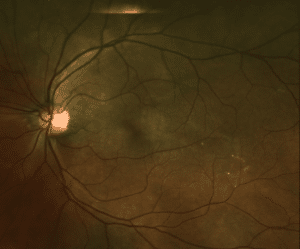 There are mild RPE changes within each macula, as well as a subtle elevation within the left MP bundle.

OCT shows subretinal fluid within the left macula, as well as a PED. There is a small serous PED in the right macula with adjacent RPE changes, but no fluid. 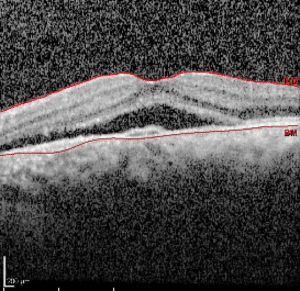 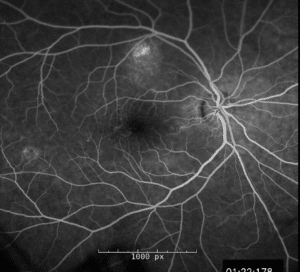 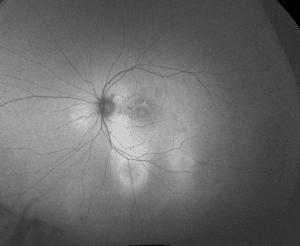 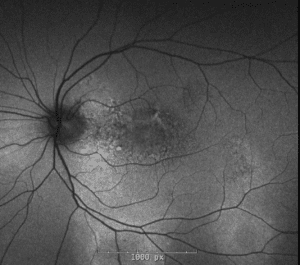 Multifocal Central Serous Chorioretinopathy is a rare variant of central serous chorioretinopathy, but is common in pathogenesis to its more common sister condition. This patient presented with symptoms attributed to foveal subretinal fluid in both eyes, from which he had been symptomatic for two weeks. The fundus appearance and imaging, clearly demonstrating multiple discrete areas of subretinal fluid with some elongation of the photoreceptors and an absence of apparent other pathological findings, particularly in the context of an otherwise healthy, young man is strongly suggestive of an acute or subacute onset of this condition. The history of significant stressors at work is also supportive, as CSCR is often associated with stress and “type A” personalities. However, in every case systemic infection or malignancy must be ruled out before solidifying the diagnosis.

Several theories have been proposed to explain the mechanism of pathogenesis in this condition. Several of these are related to endothelial dysfunction in the choriocapillaris which results in leakage of fluid in the sub-RPE and subretinal spaces. In addition to subretinal fluid there is often also one or multiple pigment epithelial detachments within the area of disease. Fluorescein angiogram in patients with this condition shows leakage within the area of serous retinal detachment(s), most classically fitting one of two patterns – the “expansile dot” or “smokestack.” However, in our patient the leakage was subtle and appeared more diffuse within each affected area.

Most often, central serous chorioretinopathy is a self-limited condition and resolves without intervention in 1-4 months. However, some treatment has been shown to be helpful in certain cases. In particular, photodynamic therapy has been demonstrated to be of some benefit in these patients. On the other hand, the procedure is usually reserved for recurrent or chronic variants since the procedure carries with it a remote chance of vision loss, if the area treated includes the fovea. Though some have suggested anti-VEGF to be of mild benefit, in particular Aflibercept, studies have failed to confirm any significant effect. If secondary choroidal neovascularization is noted to develop because of CSCR, anti-VEGF is a well-established efficacious treatment for this.

Although the exact mechanism is still unknown, corticosteroids have been demonstrated to exacerbate CSCR. Therefore, medications containing steroids, both systemic and topical, are to be strictly avoided in patients with this condition, if at all possible. Other proposed therapies include systemic therapies targeted at inhibiting the effects of endogenous corticosteroids, such as Rifampin, but these also have not been demonstrated to have any certain benefit.