A 75-year-old woman was referred by her ophthalmologist for age-related macular degeneration (AMD) with new subretinal fluid in the left eye. She noticed metamorphopsia starting 5 days prior. Her past medical history was significant for interstitial cystitis for which she took Pentosan polysulfate sodium (Elmiron). Review of systems was non-contributory. 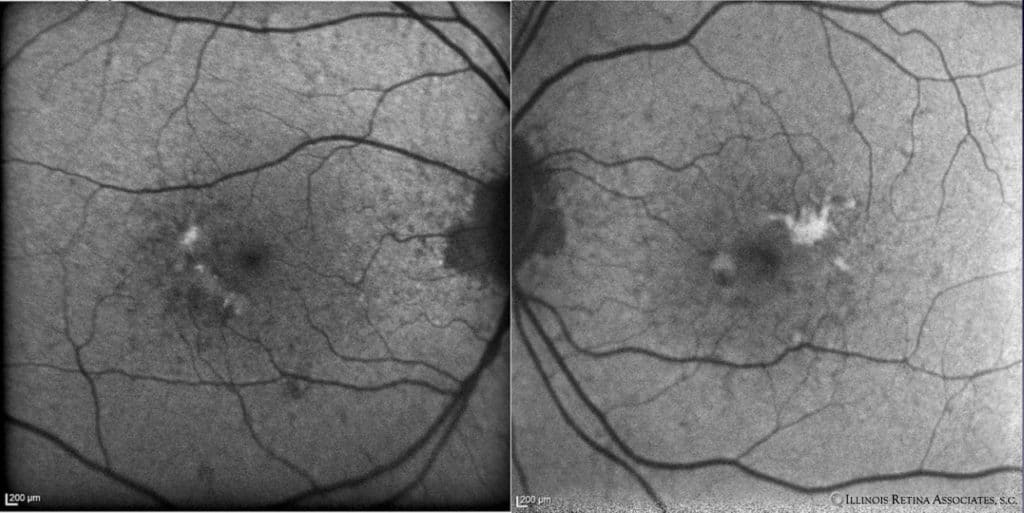 Optical coherence tomography confirmed the presence of subretinal fluid in the left eye and, additionally, showed a loss of definition of the interdigitation zones and some RPE atrophy in both eyes (Figure 3).

Figure 3: OCT scans of the right and left eyes respectively demonstrating subretinal fluid in the left eye and a loss of definition of the interdigitation zones and some RPE atrophy in both eyes.

The patient was allergic to fluorescein so a fluorescein angiogram could not be performed. Optical coherence tomography angiography was performed which did not demonstrate the presence of a choroidal neovascular membrane.

Pentosan polysulfate sodium is the only FDA approved oral medication to treat interstitial cystitis. It was first approved in 1996 and the first case of maculopathy was reported in 2018. Studies have since found a dose-dependent association between Pentosan polysuflate sodium and this characteristic maculopathy. Patients typically present with trouble reading, prolonged dark adaptation, and a loss of visual acuity. Some patients may be asymptomatic, and no formal guidelines for screening currently exist.

Most cases demonstrate involvement of the macula however rare cases affecting the peripheral retinal have been reported. Other fundus findings include RPE changes, outer retinal atrophy, vitelliform maculopathy, and cystoid macular edema. Pentosan maculopathy can also be associated with subretinal fluid with or without the presence of a CNVM so it is important to perform IVFA or OCTA in these cases to rule out the presence of a CNVM.

Although there are no formal guidelines for screening annual exams have been suggested with fundus photography, fundus autofluorescence, OCT, and near infrared imaging. If toxicity is discovered, there is no known treatment and cessation of the medication is recommended.

Fundus autofluorescence imaging will reveal more striking changes than are typically noted on fundus examination with hyper and hyperautofluorescent spots centered on the macula.

The patient was recommended see their urologist regarding cessation of Pentosan polysuflate sodium. Their urologist recommended stopping therapy. Despite the absence of CNVM on OCTA, a trial of anti-VEGF was performed. However, a significant change in the subretinal fluid was not noted and the patient has remained stable after several months of observation.