A 36-year-old male presented upon referral from an optometrist for evaluation of 5-year vision loss in the right eye. The patient had only recently established insurance and developed better control of his Type 1 Diabetes. The patient also had floaters of the left eye and some decrease in vision in the left eye. Other than that, his past medical history was unremarkable.

His visual acuity (VA) was counting fingers at 1 foot in the right eye and 20/20 in the left eye. There was no RAPD and his anterior segment exam was unremarkable. Fundus exam and photos demonstrate a tractional retinal detachment of the right eye. The left eye demonstrated neovascularization elsewhere as well as hard exudates consistent with chronic edema (Figure 1). 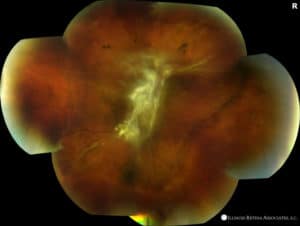 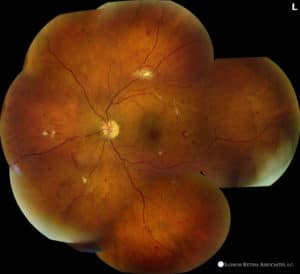 Figure 1. Fundus Photo: The fundus photos show a macula off tractional retinal detachment of the right eye and neovascular membranes, hard exudates, and dot-blot hemorrhages of the left eye.

Fluorescein angiogram (FA) (Figure 2) was obtained to further elaborate the disease burden and evaluate for extent of non-perfusion. It can be seen below: 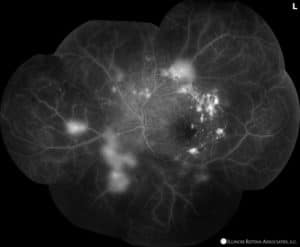 Figure 2. FA elaborates the severity of the neovascularization along both arcades and inferonasal to the disc. It also demonstrates areas of non-perfusion in the periphery.

Our patient’s slow progressive vision loss in the right eye is classic for insidious progression of neovascularization to tractional membranes that ultimately elevate and devitalize neurosensory retina. Although his left eye is seeing 20/20, it also is at risk for such progressive vision loss and a tractional detachment with or without therapy. The patient was counseled as such, but hope was also proffered along with a joint decision to tackle the diabetes and eye disease in parallel to help prevent that outcome.

Historically, destructive argon laser panretinal photocoagulation (PRP) was the gold standard of treatment for proliferative diabetic retinopathy. This stemmed from the Diabetic Retinopathy Study (DRS) and others which found a decreased risk of progression to high-risk PDR with PRP. However, in the early 2000’s, the advent of anti-VEGF injections targeted the vascular endothelial growth factors driving macular edema development in diabetes as well as subretinal fluid development in age-related macular degeneration.

While PRP remained standard of treatment for PDR, it became clear that anti-VEGF injections were able to act more rapidly to decrease the neovascular burden while PRP took effect. The Diabetic Retinopathy Clinical Research Network has even performed randomized control trials (i.e., DRCR Protocol S) demonstrating that anti-VEGF injections alone may be adequate for treatment of PDR in compliant patients who are able to maintain close follow-up.

Given the high risk our patient faced, we offered him a combination of PRP treatment with an emphasis on close follow-up and a series of anti-VEGF injections for his left eye. The patient was motivated and amenable to the plan, which resulted in beautiful regression of his membranes as seen below. 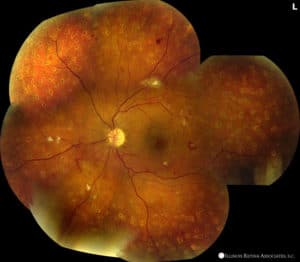 Figure 3. Fundus photos from 2 months after presentation and panretinal photocoagulation show persistent neovascular membranes along the arcades and inferonasal to the disc. 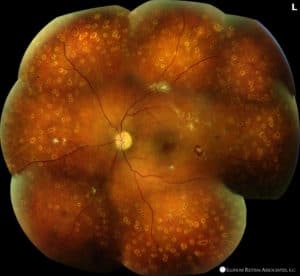 Figure 5. Follow-up fundus photos from 4 months after initial presentation and after a series of three anti-VEGF injections demonstrates regression of all neovascular complexes.

The patient maintained 20/20 vision in his left eye and will now be able to extend his follow-ups with Illinois Retina Associates for monitoring of his retinal disease.