A 30-year-old South Asian male presented to clinic referred by an outside provider for evaluation of subretinal fluid and possible central serous chorioretinopathy of the left eye. Two months ago the patient had mild “pink eye” OS, no pain/photophobia, which resolved after two days. He recalls one prior episode as a child. He also had a car accident in 2017 that required repair with screws around the right orbit in India. He hasn’t seen a general physician since then.

The outside provider shared the following OCT demonstrating the patient’s findings: 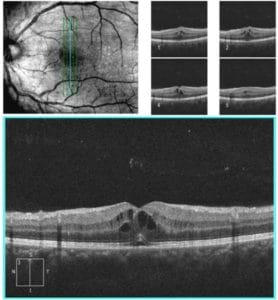 On exam, his vision was 20/40 and IOP was 13 in the left eye. The right eye was 20/20 with an IOP of 15. Confrontation visual fields were full bilaterally. Anterior chamber was deep with post-dilation rare cells in both eyes (pigmented in the right, white cells in the left persistently visible on red-free).  Evaluation of his posterior segment demonstrated the left eye vitreous having 1+ cells. Below is his fundus photo: 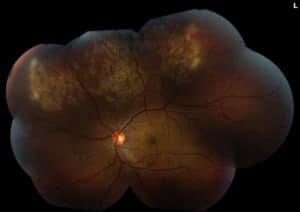 The rest of the exam appeared unremarkable: both eyes have a healthy appearing nerve with small C:D ratios. The vessels are within normal limits without perivascular sheathing.

Serpiginous choroiditis is known to be a disorder affecting both eyes without a known etiology. It is characterized by helicoid destruction of both the choroid and RPE. Visual disability follows from the resultant destruction of the retina, especially when the disease involves the central macula. This case breaks from the usual bilateral peripapillary distribution of serpiginous. It usually spreads centripetally through the posterior pole, with progressive serpentine spread emanating from the nerve. Hence, a work-up was performed to ensure that the patient is not demonstrating a viral or infectious retinitis. 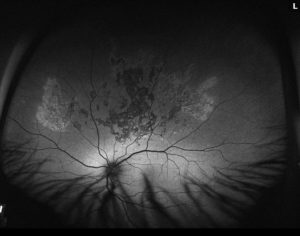 Areas of activation most frequently occur much like this-at the edges of prior lesions.  Given the hemorrhages, viral retinitis was top of mind but low on our differential given the atypical appearance.  Serum CMV and VZV titers have a population-wide positivity rate of 60% and 98% respectively, and were positive in this patient.  However, he was HIV negative and didn’t have any other signs of immunosuppression suggesting predisposition for infectious retinitis.

He was also Quant-Gold negative.  In South Asian patients particularly, a Tuberculosis-associated serpiginous variant has been described (tuberculous serpiginouslike choroiditis).  This variant responds to treatment of the TB with standard therapy.  Differentiation is paramount given that immunosupressive systemic treatment of unusual serpiginous choroiditis could be potentially devastating in this and other infectious chorioretinitis.

Our patient is relatively lucky, as he doesn’t appear to have foveal chorioretinitis and topical steroids have already started to improve his secondary custoid macular edema and subreintal fluid.  Often, these patients can have progressive foveal scarring and lose central vision as a result of choroidal neovascularazation membrane formation, retinal vasculitis and/or vein occlusions.  Flourescein angiogram did not show these in our patient.

Notably, a referring provider was concerned for central serous chorioretinopathy given the subretinal fluid and RPE changes.  However, central serious is distinguished by guttering, gravitational RPE changes extending inferiorly from hotspots of activity in the macula.  In this patient, the activity is superior and the subretinal fluid did not correspond to any hotspots.

The next step will be to start systemic anti-inflammatory medications given the evidence for recent recurrence.  Clasically, azathioprine and cyclosporine were used for long-term steroid spacing.  Active, acute pathology is usually addressed with intravenous, oral, periocular or intraocular steroids with varying success.