A 58 year-old woman presented upon referral from a retina specialist for evaluation of posterior uveitis in the left eye. The patient had developed new floaters and blurry vision in the left eye a few months prior. She was treated by the referring doctor with prednisolone and Combigan eye drops as her intraocular pressure was initially elevated however her condition never resolved. She was born in Puerto Rico and had an episode of posterior uveitis in her left eye 18 years ago after she had been scratched by a cat. This resolved without treatment and she had some recurrences which resolved without treatment. Her past medical history was significant for type 2 diabetes mellitus, and hypertension which were both controlled. She had a history of shingles 2 years prior. Her review of systems was otherwise unremarkable. 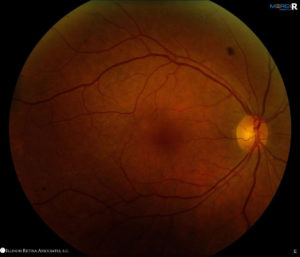 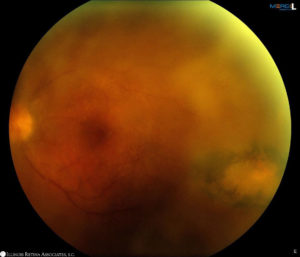 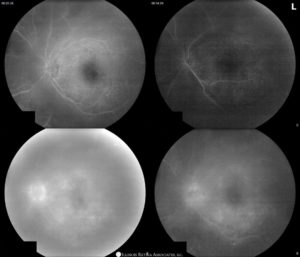 Toxoplasmosis chorioretinitis is the most common cause of infectious posterior uveitis in immunocompetent patients. However, the differential for posterior uveitis remains broad which can include infectious and inflammatory etiologies, as well as neoplastic masquerades. Toxoplasma gondii, is a single cell, obligate, intracellular protozoan parasite, and cats are the definitive host. Humans, birds, reptiles, and a wide range of mammals may serve as intermediate hosts. Rates of ocular disease are low in the United States but are higher in Latin America. Risk factors include exposure to cats and the eating undercooked meat.

This case demonstrates some classic features such as ocular hypertension (found in 10-15% of cases), focal white retinitis with overlying vitreous inflammation (“headlight in the fog”), and an accompanying nearby chorioretinal scar. Additionally, retinal vasculitis may be present.

Despite a history of exposure to cats and classic clinical signs of toxoplasmosis, posterior uveitis requires a broad differential and other infectious and inflammatory etiologies must be ruled out. A directed lab workup was ordered which included complete blood count (CBC), erythrocyte sedimentation rate (ESR), syphilis serology, angiotensin converting enzyme (ACE), Toxoplasma IgG and IgM, and Quantiferon Gold were ordered.

Not all lesions require treatment, however indications include macula threatening or optic nerve lesions, marked visual impairment, larger lesions, pregnancy, monocular status, and immunocompromised patients. The patient was placed on a 6 week course of double strength Bactrim in addition to her topical drops initially. Of the laboratory tests, only Toxoplasma IgG was positive.

The patient’s vision improved to 20/25 in the affected eye and her retinitis resolved (Figure 3). She was tapered off her drops. Bactrim was then tapered to 3 times weekly to prevent recurrences due to her history of previous episodes. Her primary care physician was asked to monitor her CBCs for leukopenia while on Bactrim as it can rarely affect folate metabolism. The patient has remained quiet over the following 2 years. 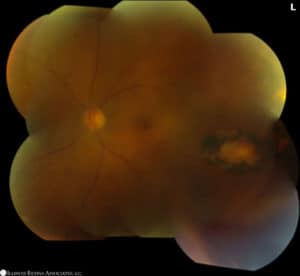 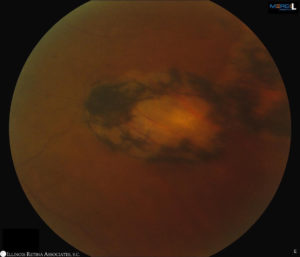