30-year-old female presenting with blurry vision in her left eye, described as a blind spot in her central vision, which has been present for about a week and has not changed since onset. She was suspected by another specialist of having myopic degeneration with a resultant choroidal neovascular membrane and subsequently underwent an intravitreal anti-VEGF injection prior to presenting at IRA. She denies any additional symptoms.

No significant past medical or past ocular history

Family and social history are unremarkable 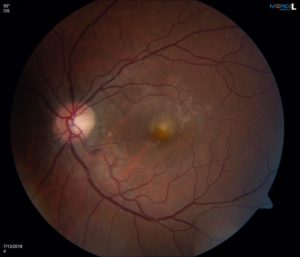 OCT of the right macula is normal, while OCT of the left shows a parafoveal subretinal hyperreflective material, suggestive of infiltrate. 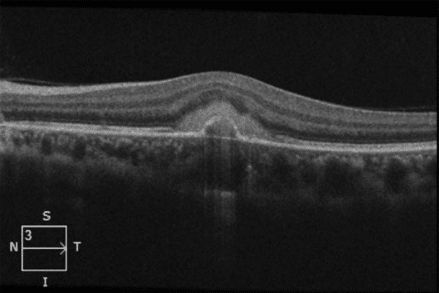 Fluorescein Angiography and ICG were performed.

Fluorescein angiography is normal in the right eye, but shows focal hyperfluorescence suggestive of leakage corresponding to the macular lesion in the left eye.

ICG was unremarkable in the right eye, but showed patchy hypofluorescence in late phases in the superior macula, surrounding the lesion mentioned above.

First described in 1991 by Yanuzzi et al., Unilateral Acute Idiopathic Maculopathy was classically described as severe vision loss in young adults secondary to an exudative maculopathy, having a neurosensory macular detachment with smaller greyish thickening at the level of the RPE, often times following a flu-like illness.1 Newer case series have expanded this entity to encompass similar pathological states that have bilaterality, eccentric macular lesions, papillitis, and subretinal infiltrate or exudates. 2

Fluorescein angiography characteristically shows irregular hypo- and hyperfluorescence over the lesion at the level of the RPE, but later demonstrates leakage in late frames in the subretinal space over the lesion, as it did in this case.2

There is no treatment for this condition. The natural course of UAIM is a rapid resolution of subretinal exudation and near complete restoration of vision, usually 20/25 or better. However, there can be late sequelae such as pigmentary changes and even secondary neovascularization, which may require treatment.2

Follow up: Only 3 weeks after presentation our patient has improved to 20/100 VA in her left eye without treatment, the subretinal lesion is less pronounced on exam, and her OCT is showing smaller collection of subretinal material. 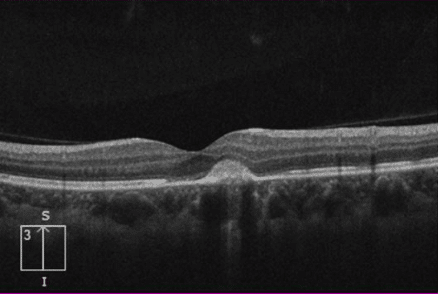