A 66-year-old African American female with hypertension, coronary artery disease, rheumatologic illness, and hyperlipidemia presented to clinic referred by cornea specialist for evaluation of decreased vision of the left eye. She had a slow, progressive decrease in vision in the left eye over the prior year. It is now interfering with her reading vision and she is extremely concerned.

On exam, her vision was 20/30 in the right eye with an IOP of 22 mmHg in that eye. The left eye best corrected vision was 20/50 with an IOP of 14 mmHg. Confrontation visual fields were full bilaterally. Anterior chambers were deep and quiet.  Evaluation of her posterior segment demonstrated both maculas grossly normal with an epiretinal membrane of the right eye and mild pigmentary changes of the left macula. Below are her widefield color fundus photos: 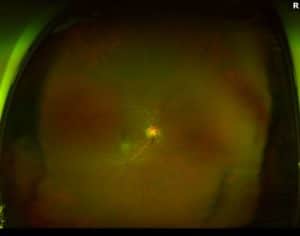 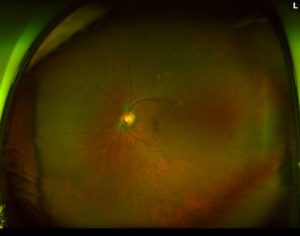 Figure 1. Fundus Photo: The fundus photo of the right eye shows a normal retina with a lens flare camera opacity over the macula. The left eye fundus photo demonstrates mild pigmentary changes around the fovea.

OCTs were obtained to further elucidate macular pathology. They can be seen below: 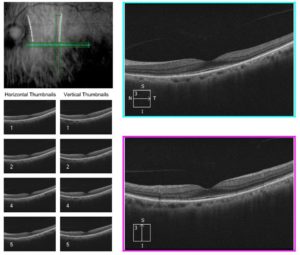 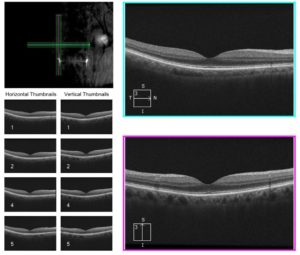 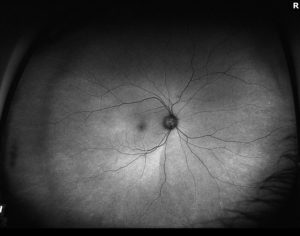 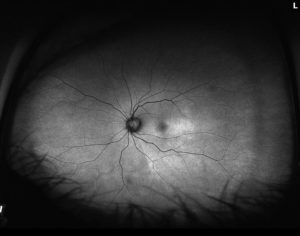 The patient was diagnosed with a unilateral bullseye maculopathy. The unilaterality was unusual. The most common cause of unilateral bullseye maculopathy is a cone dystrophy, however the timing of the patient’s vision loss late in life is clearly inconsistent with such a hereditary diagnosis. The patient revealed she had taken Plaquenil 200mg daily for about 20 years but had stopped taking it for 7 months prior to seeing a physician at Illinois Retina Associates. She is now using Imuran for Lupus control, but she remains at risk of progression of the Plaquenil maculopathy regardless of having changed to a new medication.

In early Plaquenil maculopathy, an excess of the molecule A2E (the same in AMD and other macular diseases) accumulates within the parafoveal retinal pigment epitheliam. The accumulated A2E leads to cell death in the retinal pigment epithelium cells. During the acute phase of cell death, the lipofuscin pigment in these RPE cells becomes more exposed. Lipofuscin emits light around a wavelength of 525 nm when excited by light of wavelength 480 nm, which results in hyperautofluoresence. Later, once the dead RPE cells have been completely destroyed and lipofuscin disperses or is phagocytosed by Mueler cells and microglia, the area become hypoautofluorescent.

While the hyperautofluorescent in a ring around the fovea of our patient is typical of early plaquenil maculopathy, outer retinal atrophy is more classically seen in later stages of medication toxicity. This case is unusual in that the toxicity is so asymmetric and severe in the affected eye. The unilaterality of the toxicity suggests that her left eye may have been predisposed to toxicity due to a prior trauma in that eye.

It will be extremely important to monitor this patient for progression given the possible nascent nature of this toxicity. As mentioned, the maculopathy can progress even with plaquenil discontinuation. Risk factors for maculopathy include a daily dose greater than 5 mg/kg, use longer than 5 years, Impaired renal function, pre-existing retinal pathology, and concurrent tamoxifen use. Historically, four other factors are no longer considered significant (age, cumulative dose, obesity, and impaired hepatic function).

Of note, while most demographics have central 10-2 visual field changes earlier in plaquenil maculopathy, current guidelines and recommendations highlight that patients of Asian descent may be more prone to developing peripheral visual field defects first and screening guidelines have been revised to advise screening those patients with 24-2 Humphrey visual fields in addition to referral to a retina specialist for evaluation of subtle changes on OCT, electroretinogram, and/or fundus autofluorescence.