A 14-year-old boy presented to clinic after referral from his optometrist for peripheral retinal pigmentary changes in both eyes. He also had vague complaints of worsening vision at both distance and near in both eyes. He had no eye pain, redness, trauma, flashes, floaters, or field loss. Review of systems was negative aside from needing hearing aids since he started elementary school. He had no significant past medical history, surgical history, or medication use. He had no family history of eye problems.

Vision was 20/30 in both eyes. IOP was 11 and 13. Confrontation visual fields were somewhat constricted bilaterally. Anterior exam of the both eyes was unremarkable. There was trace cell and beading fibrils in the anterior vitreous of both eyes.

Below were his initial imaging findings: 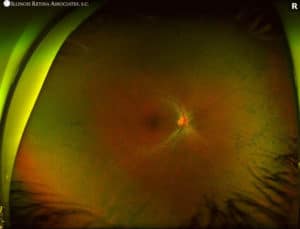 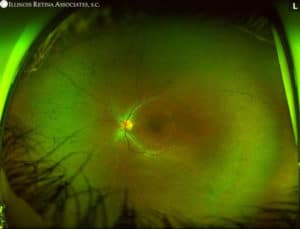 Based on abnormal findings on fundus exam, further imaging was completed. OCT and fundus autofluorescence of both eyes were obtained. 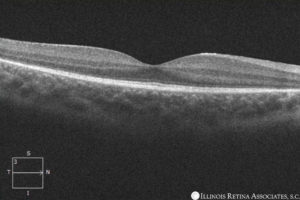 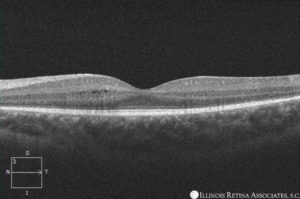 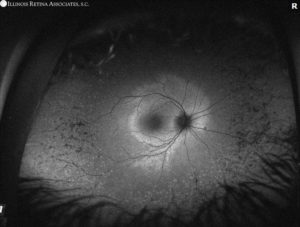 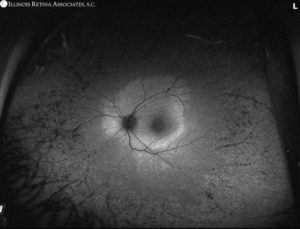 The combination of hearing loss with retinal pathology flagged the serious, emergent diagnosis of Susac syndrome (a “must not miss” diagnosis). However, given the uncharacteristic slow, years-long onset, and lack of retinal vasculitis with Kyrieleis plaques, an MRI and MRA for cerebral vasculitis may be avoided. Alport syndrome and Bardet-Biedel syndrome are also among the diseases that may cause hearing loss with retinal pigmentary changes.

Lower on the differential are CME secondary to intermediate uveitis and JXLR, both of which are associated with cystic changes of the macula. However, without signs of inflammation and in the context of the peripheral pigmentary changes, the findings pointed more towards an inherited retinal disease.

The bone spicule changes peripherally are pathognomonic for retinitis pigmentosa, however syphilis (particularly congenital which can also cause hearing loss) and DUSN (usually unilateral) should also be considered. 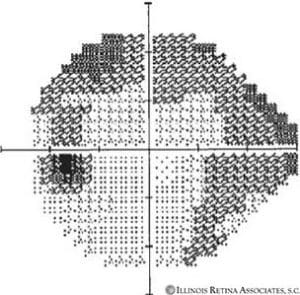 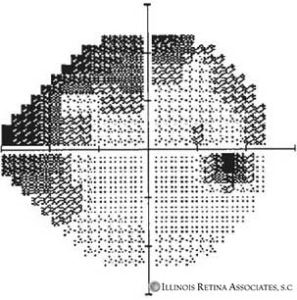 Genetic testing was ordered in light of these results, and a pathologic mutation was found in both alleles of USH2A, confirming the diagnosis of Usher Syndrome.

Usher syndrome is an exceedingly rare disease with about 3 cases per 100,000 in the general population. It accounts for 5-10% of all congenital deafness, thus all deaf pediatric patients should have retinal screenings. People with heritages of Ashkenazi Jewish or French Acadian backgrounds are predisposed.

This retinitis pigmentosa variant affects stereocilia present in both the retina and cochleae of the ears. Usher syndrome is subclassified into subtypes I, II, and III depending on genotype and phenotypic symptoms. Type II, such as in our patient, presents with moderate hearing loss without vestibular dysfunction. All subtypes are at present incurable, but patients often benefit from cochlear implants.

There is currently a great deal of research and promise for new retinal gene therapies and Illinois Retina Associates is a referral center for enrollment in such clinical trials. In addition to gene therapy, there is also exciting work being done on use of deuterated vitamin A as a tool to inhibit vitamin A dimerization and halt progression of inherited retinal diseases. While we await FDA-approval of these possible new therapies, patients do benefit from regular visits with retinologists and for monitoring of addressable sequelae such as premature cataracts.