A 48-year-old Caucasian female presented to clinic with referral for abnormal exam findings. She denied any visual complaints other than an occasional feeling she had some trouble adjusting to a dark room when coming from outside.  She had no eye pain, no redness, no floaters, no curtain, no veil, and no recent trauma.  Her medical history was significant for hypertension. Review of systems was negative for chest pain.  She denied smoking, alcohol use, or any illicit drug use.

On exam, her vision was 20/30 in her right eye and 20/30 in her left eye.  IOP was 14 in both eyes. Confrontation visual fields were full bilaterally. Anterior exam was unremarkable.

Evaluation of her posterior segment demonstrated clear vitreous bilaterally.  Below are her fundus photos: 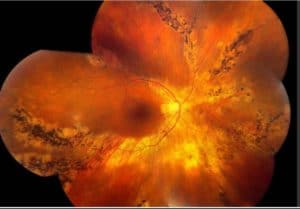 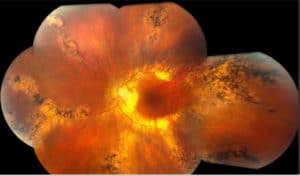 Fundus Photos: Both eyes demonstrated optic nerve pallor and peripapillary atrophy.  She had bilateral vascular attenuation with RPE atrophy along the major veins extending into the mid periphery. Bone spicule-like pigmentation was noted adjacent to the RPE atrophy. 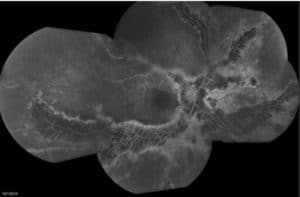 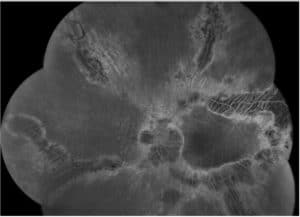 Fluorescein Angiogram OU: Both eyes with transmission defects consistent with geographic atrophy of the RPE and choriocapillaris.  Blockage was also seen that corresponds to the hyperpigmentation seen on fundus photos. 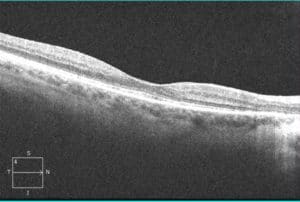 Pigmented paravenous retinochoroidal Atrophy (PPRCA) is a disorder of unknown etiology characterized by pigment accumulation along the retinal venous distribution.  Although the cause is unknown, it is believed that a presumed inflammatory insult in a patient’s history leads to a slow development of the retinal signs.  It is characterized by RPE degeneration, choriocapillaris atrophy, and pigmentation along the veins.  Patients typically present for routine examination and PPRCA is incidentally found.  Rarely, if the macula is involved, patients may note decreased vision.

As in our patient, anterior and vitreous examination is usually normal.  Fundus findings tend to be bilateral, but asymmetry has been reported.  Diagnosis is often made clinically but can be aided with imaging.  Fundus autofluorescence shows areas of hypoautofluorescence due to RPE loss and lower lipofuscin levels in atrophic regions.  In affected areas, OCT may show thin retinal layers with loss of photoreceptor outer segments, ONL, INL, and RPE.  Fluorescein angiography will reveal window defects with hyperfluorescence and scattered areas of blockage in areas with pigment clumping.  Prior to diagnosing PPRCA, appropriate lab work-up should be initiated to rule-out any concerning infections (TB, syphilis) as well as common inflammatory diseases such as sarcoid.

PPRCA usually portends a good prognosis due to the very slow progression of the disease.  As long as there is no macular involvement, good visual prognosis is expected.  Although the cause is unknown, studies have shown that there is likely a familial genetic component and thus children of diagnosed patients should be examined for similar findings.  Some studies have suggested a mutation in the CRB-1 gene, which is also seen in diseases such as Leber’s Congenital Amaurosis, Retinitis Pigmentosa, and Coats-like vasculopathy.  Thus, when diagnosed, it is reasonable to recommend genetic testing for your patient.

Our patient has done well since diagnosis.  She has had minor progression on exam over 25 years, but vision is still 20/30 OU.  She has noted no issues with night vision and no other family members were found to have the disease.